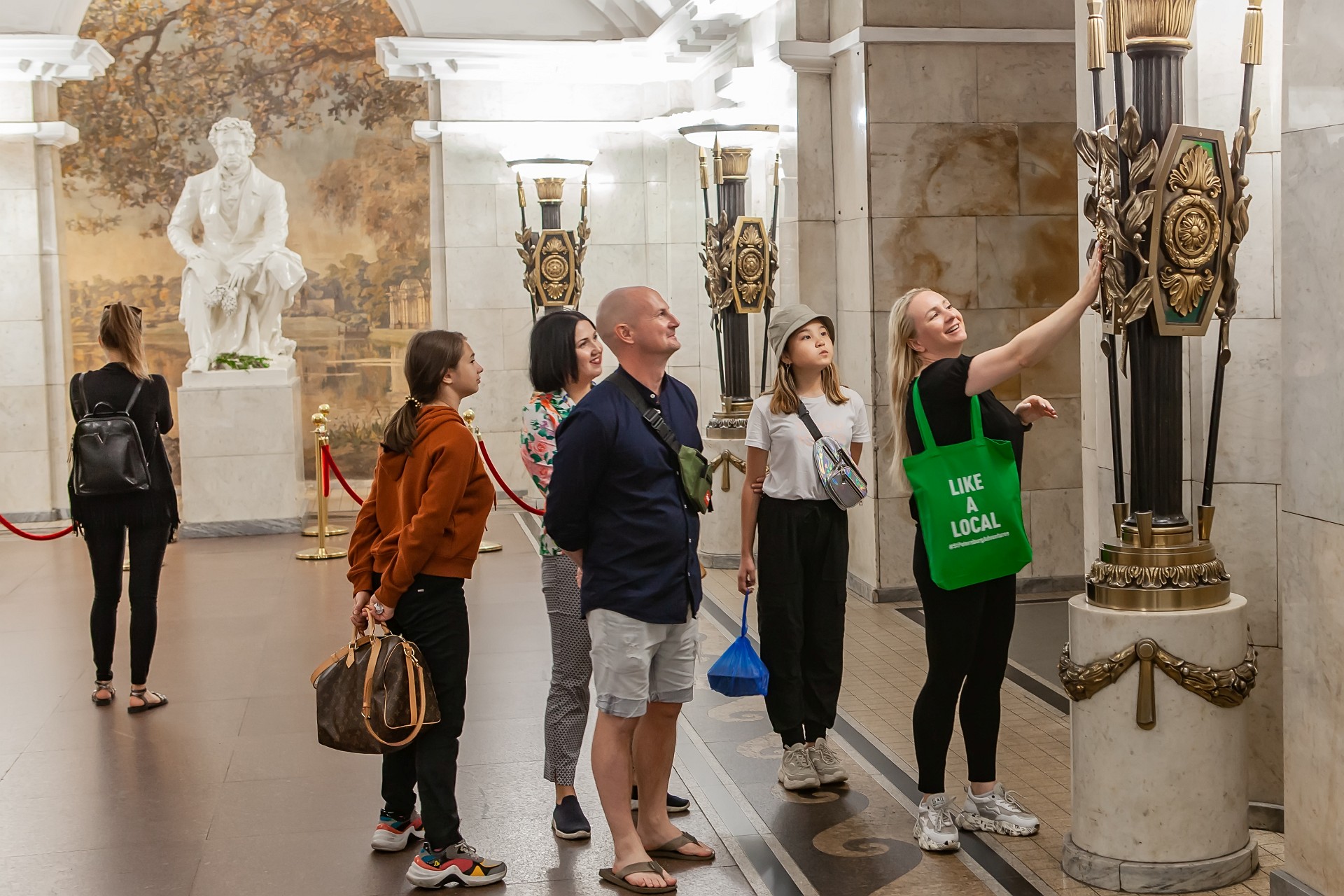 This blog post, I will give you some information about the most beautiful St. Petersburg metro stations that are highly recommended to visit on your trip to St Petersburg. Russia has undoubtedly one of the most beautiful metros (subway, underground,  whatever you call it) in the world and not visiting it on your trip to Russia would be a mistake (considering that the underground ticket price in St. Petersburg was less than $0.7 (65 Rub) in 2021, and there is no time restriction, so you get all day long to visit as many stations as you wish , something you will not find in many other countries. The good news is if you visit St Petersburg in the winter and looking for something to do on one of those harsh cold days, then exploring the Metro can work out very well.

This short blog will show you the best metro stations to visit , if you have the time it is always recommended to take one of the Metro tours of St petersburg with a local guide doing this will not only show you the most beautiful metro stations but also give you a chance to learn about the history of these fantastic underground palaces.Now has never been such a good time to visit St Petersburg  did you know that most people can visit St. Petersburg with a free e-visa now?

The St Petersburg Metro map is fairly easy to navigate and the good news is all the stations have signs in English it is not easy to get lost so do not worry. There are plans to add some new stations to St. Petersburg underground system. However, it takes ages to build a new metro station in St. Petersburg due to the presence of underground rivers and the fact that St. Petersburg is located on multiple islands. For this reason many of the metro stations are built very deep underground , you will see this straight away once you hit the stairs going down.

Let’s Visit The Most Beautiful Metro Stations In St. Petersburg

So without further ado, let’s get started with the best metro stations in Saint Petersburg. If you enjoy this blog and decide to take a St Petersburg guided tour of the metro please check out the tours we offer at the top of this page.

Avtovo station is one of the  highlights of St. Petersburg metro system.  Avtovo  is undoubtedly Sr Petersburg’s most amazing and beautiful stations  once there you could easily be mistaken for thinking you are in an underground palace with marble walls, and fantastic chandeliers and dim light. The best time to visit the Avtovo metro station is around 12- 2pm on weekdays, so you can see the station quite empty and take a good photo of it. During peak time it can get very busy and probably you will not get the best opportunity to see this fantastic metro station in its full glory. Avtovo station is always a popular station to visit on any tours of St Petersburg metro stations.

2. Zvenigorodskaya & Pushkinskaya – This One Is Definitely For Literature Lovers

If you are a lover of Russian literature you will love these stations.These two are actually just one station where you can change from the purple line to the red one, so it’s one station but two platforms and two vestibules it is also a very busy station during peak times so again the best time to visit is in the evening or on a Sunday. Both stations are actually very different. Zvenigorodskaya is newer and it’s decorated with green granite and white marble. It also has some very beautiful mosaic art at the end of the platform. Pushkinskaya station is dedicated to the famous Russian poet – Alexander Pushkin (he wrote Eugene Onegin and many other novels and poems) and also looks impressive with the statue of A.S. Pushkin at the end of the platform if you decide to take a Metro tour this station is a must and a great place to get a few photos in next to the Alexander Pushkin statue at the far end of the station.

Admiralteyskaya is one of the deepest metro stations in the world (the second deepest to be exact – it’s located 102 meters below the ground level) and it has not one, but two escalators the trip down to this metro station really is amazing , just looking down at how deep your are travelling really is an experience in itself. The Metro station is situated very close to Palace square, so if you’re thinking about visiting the Hermitage, Winter Palace and the Square this is the station you will need to exit.

4. Narvskaya – The Station For The People Of USSR

Narvskaya metro station  is dedicated to the hard work of the people of USSR. It’s a typical USSR style monumental station. Narvskaya follows Kirovsky Zavod on the red line and is also a Soviet-themed station. The main idea here during building was to celebrate the various professions throughout the Soviet Union. On the walls, there are haut-reliefs of doctors, builders, farmers, sailors and other highly regarded professions.walls. This station is definitely worth a visit to give you an insight into Soviet architecture, in fact just standing in this fantastic station is enough to take you back to Soviet times and feel the atmosphere of the time. Defiantly a station to add to your St Petersburg metro tour.

5. Kirovskiy Zavod – The Grey Marble One

The name of the station comes from the Kirovsky factory located in the vicinity, and the general theme of the station is the development of socialist industry. It’s decorated with grey marble and has a very special illumination – it looks like there is no ceiling there, just a sky above you. It’s the next station after Avtovo and it’s a station before Navskaya, so you can visit them all in one journey. You will find many of St Petersburgs best metro stations on the Red line  , Line number 1 So it is very easy to check them all out without getting lost.

The name of the station is literally translated as ‘Square of the Revolt’, which is indeed where the subway is located. The design of the station is likewise dedicated to a theme, which is the October Revolution of 1917. It was the first station to have two exits. At the exit that leads towards the Moskovsky Railway Station, there are four bas-reliefs. One depicts Lenin delivering a speech after arriving in St Petersburg after years in exile, another is of Lenin in his hut, another one shows Lenin delivering a speech at the Tauride Palace, and the final one is of the cruiser Aurora.

Obvodny Kanal is a s example of modern metro stations in St. Petersburg), but it looks interesting, and some say it resembles a spaceship. Obvodny Kanal is a station on the Frunzensko–Primorskaya Line of the Saint Petersburg Metro. The station opened on December 30, 2010, between the already completed Volkovskaya and Zvenigorodskaya stations, if you want to see a modern Russian metro station this station is a must.

Mayakovskaya is the interchange station from Ploshad Vosstaniya and it’s dedicated to the famous Russian poet Vladimir Mayakovsky. It’s a very bright station, decorated in red colours. The station on the Nevsko–Vasileostrovskaya Line of Saint Petersburg Metro, opened on November 3, 1967 The station is not as stunning as many of the well known St Petersburg but as it is central the station is often very busy during the peak period.

Technologichesky institute is an interchange station (between the red and the blue lines) and it’s dedicated to the achievements of Soviet Science and decorated in marble. Exits from both halls are located at the northern end, with three escalators each. The first hall was opened on November 15, 1955, as part of the first metro line between Avtovo and Ploshchad Vosstaniya.

Lastly , but not least of the most beautiful metro stations on the Saint Petersburg metro line is Krestovsky Ostrov. If you’re planning to visit Zenit Arena (the main stadium of St. Petersburg), you will probably use this station. Krestovsky Ostrov is a station on the Frunzensko-Primorskaya Line of Saint Petersburg Metro, opened on September 3, 1999 The station is situated in a very nice part of the city and defiantly worth a walk around outside if you have some spare time.

St. Petersburg’s subway is not very hard to use and is considerably smaller than Moscow Metro though you have to keep in mind some times during the day the stations can be extremely busy and easy to become disorientated . The metro is the fastest way to get from A to B throughout the St Petersburg, and many stations are true pieces of art. Fare is 65 roubles 2021 discount cards are available.

The St. Petersburg’s subway (metro) system runs five lines with interchanges between them (see the map). Each of them has its official name, but the locals refer to them by the names of the colors: red instead of Kirovsko-Vyborgskaya, blue instead of Moskovsko-Petrogradskaya, etc.

Finding an entrance to a station on the street is easy by the mark M (on the photo below) You can usually find a Metro station in any part of the city within a 20 min walk time , even if you do not speak Russian it is very easy to ask any local “Gydar metro” Where is the metro station?